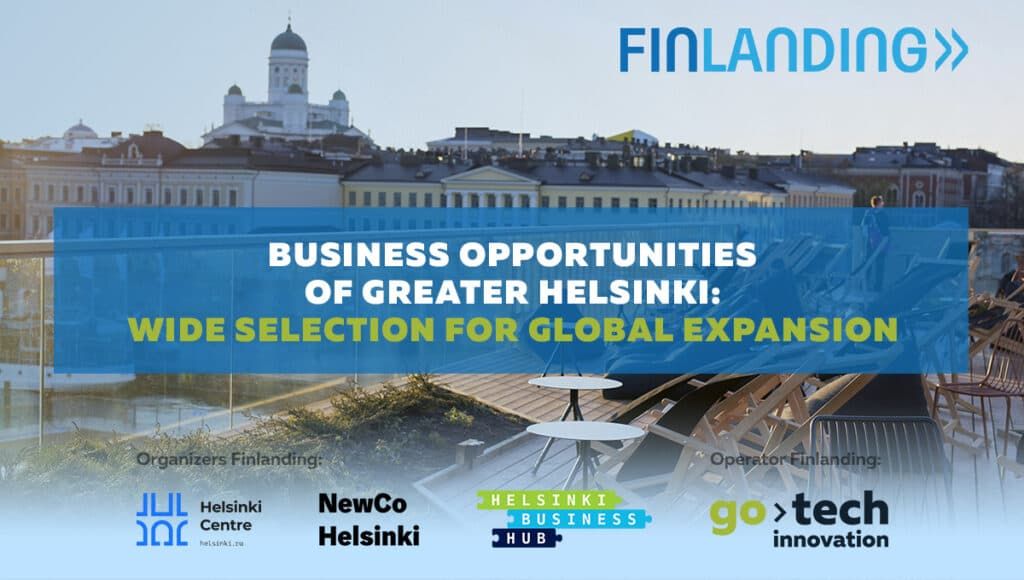 It is the focus on growing global startups that makes the Finnish capital stand out on the innovative map of the world.

According to Dealroom.co, the overall financial valuation of startups located in the Greater Helsinki region has tripled over the past 6 years. Now it is € 25.2 billion. It is the 8th valuation in Europe. Helsinki has the same place in terms of the number of unicorns. In the first half of this year, the volume of attracted venture capital investments in startups located in Helsinki has already surpassed the investments for the whole 2019.

In the Startup Genome study, by the end of 2020, Greater Helsinki ranked second among all European cities and fourth in the world in terms of the development of an ecosystem for startups.

The study covered more than 100 factors that influence the development of ecosystems for startups. Greater Helsinki received top marks in categories such as market access, fundraising opportunities, skilled workforce, and investment activity. It was also noted that Finnish startups attract the largest volume of venture capital per capita. Among other factors of attraction of Helsinki, the researchers identified the lifestyle in the city, government policy and infrastructure to support innovation, superiority over competitors in Scandinavia in terms of personnel costs and business development in general.

NewCo Helsinki supports startups and young companies under 5 years old. The organization’s experts provide entrepreneurs with the necessary information on business support measures in the Helsinki region, help with business registration, fundraising or search for partners, including for entering foreign markets. For early-stage startups, the assistance of an accelerator is provided, with the provision of personal advice from specialists. One of the important tasks of NewCo Helsinki is to provide networking for startups.

Business Finland is the largest business support institution in Finland. Here they help young companies looking for scaling opportunities in foreign markets. For example, they provide funding to test startup projects and get feedback from the market. The amount of such a non-refundable grant can be up to € 50,000, while it should not exceed 75% of the total project budget. For startups with an interesting idea for scaling internationally, Business Finland can provide a grant of € 5,000-10,000 to cover no more than 50% of the costs of the required market research. In 2018 alone, startups managed to raise € 153 million through the organization. Business Finland also has many other forms of support: R&D financing, consulting services, assistance in interacting with foreign infrastructure for startups, soft-landing, etc. At the beginning of this summer, eMabler project (eMobility area) received one of the grants from Business Finland. The allocated funding was part of a total investment of € 630,000 that the company raised for development in European countries with a priority on Scandinavia.

More than 30 business incubators and accelerators are in the Greater Helsinki region. As a rule, they single out one priority area, which startups should represent. For example, these are energy, health, education, virtual and augmented reality. This year, the City of Helsinki and Aalto University announced the opening of a new business incubator, Urban Tech Helsinki. The first residents will appear here in the fall.

The City of Helsinki also owns 34% of the Maria01 Startup Campus. It is in the building of the very first hospital in Helsinki, which was named after Maria Feodorovna, the wife of Emperor Alexander III. In 2014, the history of the hospital ended, and two years later, an innovative campus was formed here. More than 170 companies are its residents today. The main task of the campus is to form new connections between startups, investors and other companies that are interested in investing in innovative development. At the end of 2020, Maria01 reported 32 deals with a total investment in startups of € 348 million. The campus management hopes to become the leading European in its field by 2026.

Helsinki is also a premier startup conference venue. One of the largest forums – Slush – this year, according to the organizers, will return to offline mode again. At the beginning of December, about 8000 Slush participants are expected in Helsinki. Two years ago, there were 20,000 of them, but now we must make a correction to the pandemic. By the way, the winners of Finlanding will also participate in the forum.

Another important event in the life of the startup industry in Finland is the Arctic15 forum, which attracts participants from more than 60 countries.

The unique experience of Greater Helsinki can be considered the creation of several sites for testing technological solutions from startups.

Smart City, Smart Energy and Smart Retail projects are being tested in the residential area Smart Kalasatama. There are already more than 20 solutions in the funnel of this area. Self-driving vehicles are being tested in real conditions at the Jätkäsaari Mobility Lab, located in the developing area of ​​the same name. The atmosphere of the area is given by the fact that it is adjacent to the new terminal of the passenger port and in general has a large coastal zone. One of the projects of this hub is an unmanned garbage collection vehicle. Based on Aalto University facilities in Espoo, the Smart Otaniemi site was created, where solutions in the field of Smart Energy, Mobility and City Design are tested.

Opportunities for startups piloting their projects are also offered by a special service Testbed Helsinki, organized by the city authorities. It is a portal where you can find partners and opportunities to develop and test technology solutions. Focus: EdTech, Built Environment, Health & Wellbeing, and Smart Mobility. Both local and foreign startups can submit applications on the portal, and the stage of the company’s development is not important. On average, after the approval of an application for testing a project, it takes 3-6 months.

Helsinki is a real klondike for startups ready to actively develop and enter international markets. The infrastructure offered by the city competes with the world’s best counterparts. And, as many say, there are no competitors inside Helsinki – all friends and partners aimed at creating a comfortable future.

An excellent opportunity to develop business in Finland and enter global markets is participation in Finlanding program, organized by the Helsinki Centre in St. Petersburg, together with NewCo Helsinki and Helsinki Business Hub. Finlanding program is open to Russian companies with sales of their product / service, a strong team with marketing competencies and a deep understanding of technology. If your startup meets the listed requirements and is ready to enter the international market, hurry to apply for participation in the selection by September 20, 2021 here. Finlanding program is operated by GoTech Innovation. 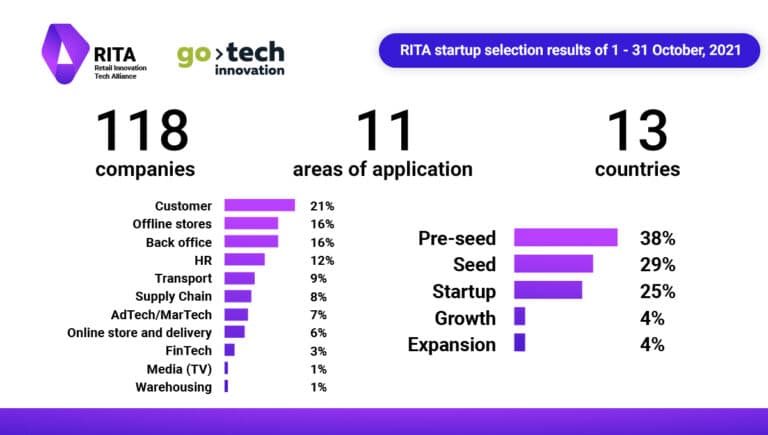 Retail Innovation Tech Alliance (RITA) has completed the sixth selection of startups to implement joint projects with the largest retail and technology corporations in Russia and Kazakhstan.

More
3 days left to apply for RITA: entrepreneurs, hurry up! 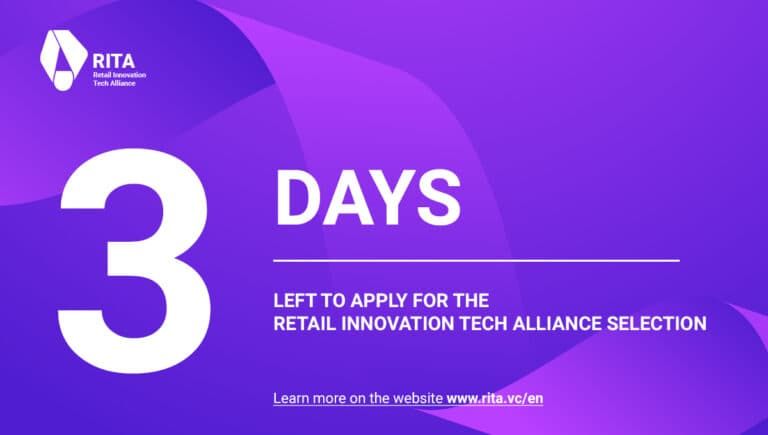 There are 3 days left until the end of the selection of startups conducted by Retail Innovation Tech Alliance (RITA). 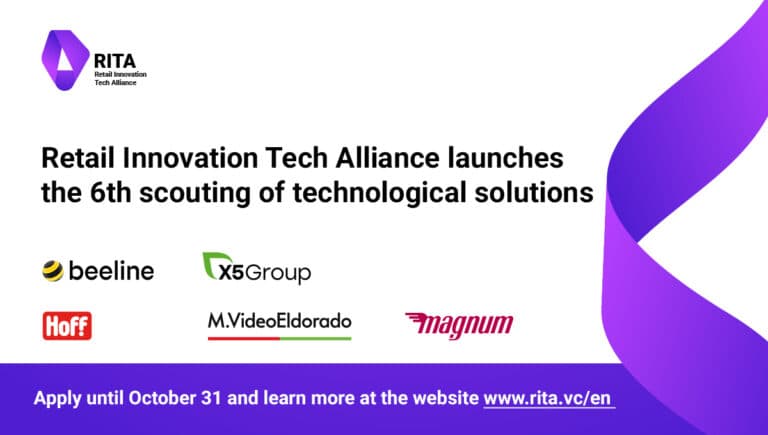 October 20, 2021 Moscow – The Retail Innovation Tech Alliance (RITA) announces the sixth selection of startups to implement joint projects with the largest retail and technology corporations in Russia and Kazakhstan. 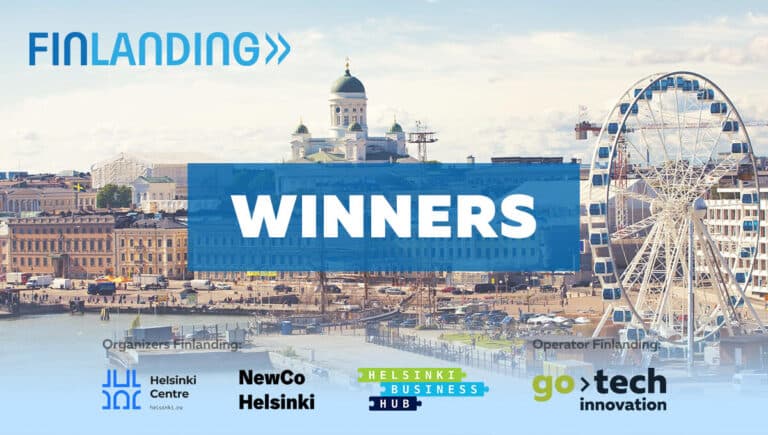 On October 14, the pitch sessions of the finalists of the Finlanding took place. 12 companies presented their projects to the experts of Helsinki Centre, NewCo Helsinki and Helsinki Business Hub.

More
Finnish startups are attracting investment. Among them there are companies from Russia 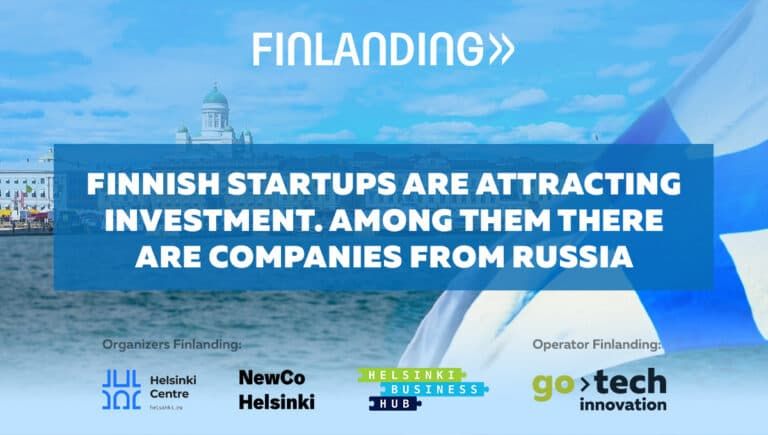 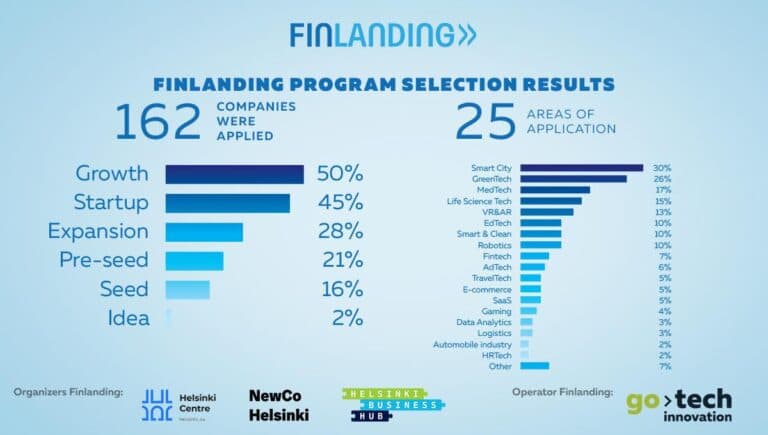 On September 20, the acceptance of applications for technological projects within the Finlanding program ended. We would like to share its results with you. 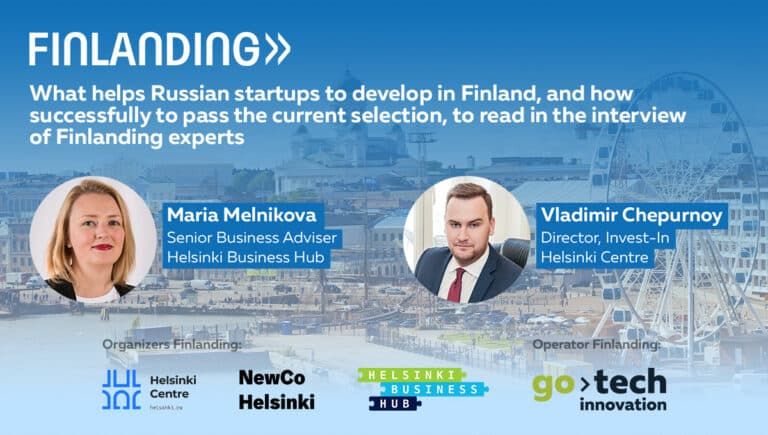 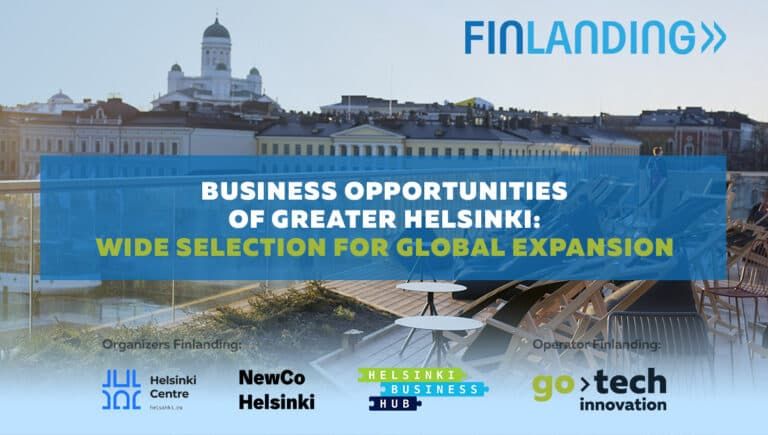 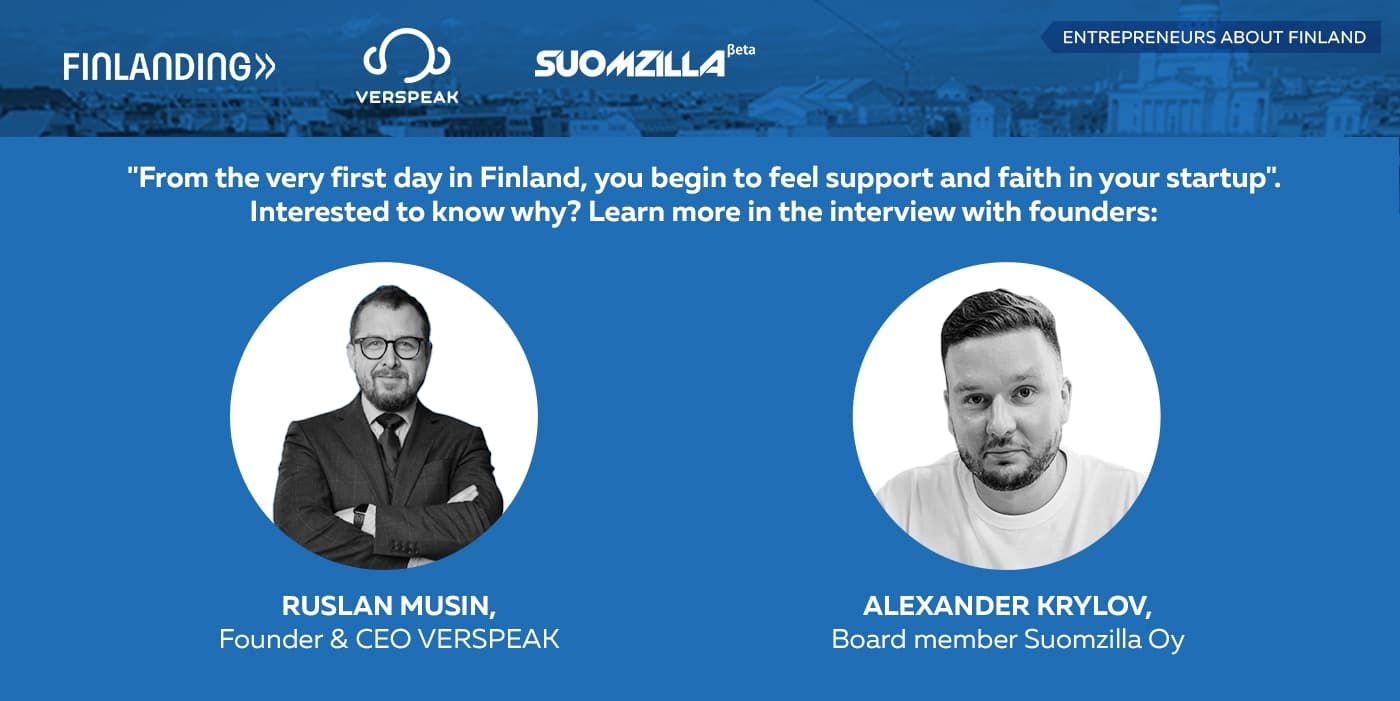 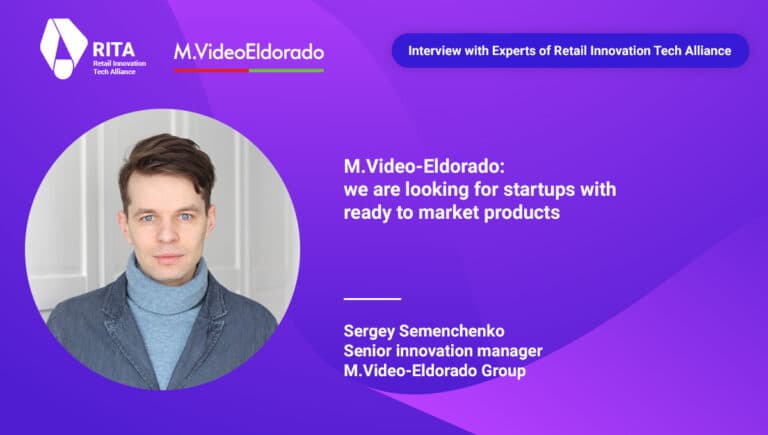